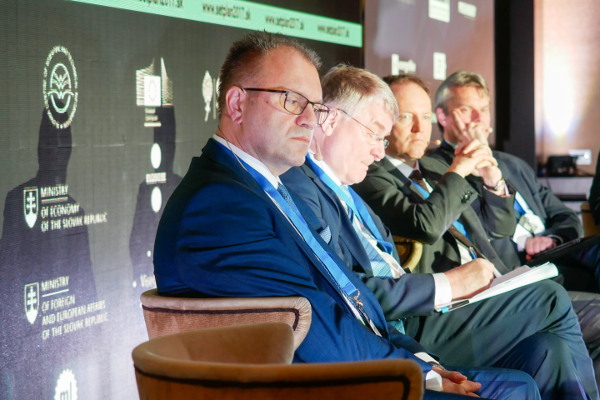 Clean energy attracted the biggest share of investments in the energy sector.

Investments into clean energy including energy efficiency, renewables and smart grids amounted to 43 percent of global investments in the energy sector worth $1,3 trillion dollars.

The representatives of Slovakia and Austria, who also spoke at the conference in early December, had diverging opinions about the role of nuclear energy in European Union’s future energy mix. They agreed, however, that Europe has to invest more in research and innovations in the energy sector.

According to Ristori of the European Commission, the EU is already a leader in investments in green energy. It nevertheless needs to redesign its electricity market, which should be achieved through a new regulation currently under discussion.

The senior officer compared Europe with China and the United states. China is also a big investor, but it “has a different vision”, said Ristori referring to the different political regime that does not allow a free public debate. The United States were the first to liberalise the energy market, but they sought advice from the EU on the market design regardless.

“That makes a big difference between being a leader and a follower,” said Ristori, according to whom the EU is still a leader.

Solidarity between West and East

The Commission representative listed the legislative initiatives, which the Commission presented in the recent years. The proposals to strengthen energy security that represent, according to Ristori, “real solidarity between the West and the East,” were already approved.

This year, the legislative package “Clean Mobility” has been introduced.

Ristori highlighted the role of electromobility. “We can expect rapid and important progress of electric vehicles,” the senior official claimed. Many European countries will soon introduce support schemes, he said criticizing the opponents of the mandatory installation of charging points in new buildings. “We need to prepare for clean energy in cities,” stressed Ristori.

One of the objectives of the package “Clean Energy for All Europeans” and especially of the regulation on electricity design is to prepare the electric grids for a higher than a 50-percent share of renewables in 2030, Ristori said.

The energy system should be more flexible and digitalised thanks to an improved management of demand, but also transmission and production of electricity. “Distribution will become more strategic because of prosumers,” Ristori believes.

The senior official stressed that countries with highest investments in research and innovation are also the most competitive. “In the EU, we are very good in fundamental research, but not in transforming it into new markets,” he added.

Asked by the public, how he sees Russia, Ristori responded that it “is and will remain (for the EU) an important energy country” given the Russian oil and gas imports in the EU. Both economies must conduct a dialogue and cooperate on clear principles included in the third energy package.

The Director General underlined, however, the importance of supply diversification. In a “very short time” the EU managed to make a progress in infrastructure in the Baltic and Northern countries as well as within the CESEC in South-Eastern Europe.

At the same time Ristori pointed out that “Russia is becoming an immobile and oriented towards the old world, having difficulties accepting the evolution of the world market.” One example is, according to him, the market with liquefied natural gas with weak Russian presence.

European Committee of Regions’ Vice-President Markku Markkula believes the priorities in the energy sector are investments, digitalization as well as regional and smart specialization.

He argued that investments should not come only from the EU, but also from local, regional, government and private investors. The Committee of Regions designated 20 ambassadors for climate and energy and works on an action plan. Markkula wants the issue to become part of the initiative on the future of Europe by European Council President Donald Tusk.

Smart cities are a reality, according to the Committee’s Vice-President. He said his hometown Espoo, Finland, wants to become carbon-neutral by 2030.

Slovakia’s plans for the Energy Union were laid out at the conference by State Secretary at the Ministry of Economy. “Nuclear energy is its inseparable part,” reiterated Vojtech Ferencz the long-term Slovak position.

He also listed among the Slovak priorities energy security and low-carbon energy system. The “Clean Energy” package, which Slovakia’s representatives review as lawmakers in the EU Council, requires “a lot of work”, said Ferencz. The most important, according to him, is balancing the principles of solidarity, subsidiarity and proportionality.

The issue of competence transfer to the European level is considered by the State Secretary as an “extraordinarily dynamizing element” of the debate. He said Slovakia would continue to defend the principles of technological neutrality and freedom of the choice of energy mix.

Regarding energy security, Ferencz stressed that “the strength of the chain is determined by its weakest link.” He called upon EU’s Member States to behave responsibly, diversify supplies and remove national market barriers. Slovakia attempts to stick to these principles, according to Ferencz, in electricity as well as in natural gas. The State Secretary considers science, research and innovations as means to sustain the country’s competitiveness.

According to the Estonian Ambassador to Slovakia, representing the current EU Council Presidency, the new legislation must improve the cost-effectiveness and digitalization of the energy system. “More market will lead to cheaper prices for consumers,” underlined Rein Oidekivi. He said “the EU must act as an R&D powerhouse and a test market.”

The Estonian Presidency hasn’t given up on the ambition to reach a general approach on the new legislation on renewables, market design and Energy Union governance. It will have the last chance to obtain it at the Council meeting on 18 December.

The discussion within the EU Council and with the European Parliament will be conducted in the first half of 2018 by the Bulgarian Presidency and in the second half by the Austrian Presidency.

Director General at the Austrian Ministry of science, research and economy Michael Losch said at the conference that Austria’s term at the helm of the EU will be focused on the cooperation with the Energy Community linking South-European countries across EU’s external borders, with the United Nations Industrial Development Organization and with UN’s initiative Sustainable Energy for All (SE4ALL) targeting development countries.

He also believes the European Fund for Strategic Investments should be more focused on the energy sector.

For Austria, nuclear energy is not the future.

Next year’s edition of the SET Plan held under the auspices of the Austrian Presidency will focus, according to Losch, on “smart and resistant” cities and buildings, renewables and common projects for reaching EU’s 2030 targets.