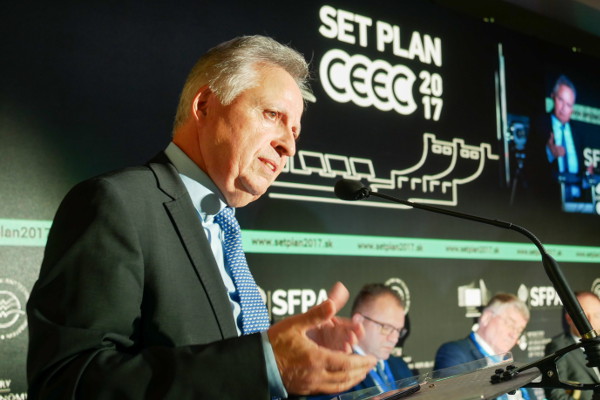 Dominique Ristori: ‘With Poland, we have an extremely positive energy dialogue’

European Commission prepares a new initiative to support the coal regions, while the phase-out is accelerating, said Director General for Energy Dominique Ristori.

Dominique Ristori, Director General for Energy at the European Commission, was interviewed at the Central European Energy Conference – SET Plan 2017.

European Commission is seeking a mandate to negotiate with Russia on Nord Stream 2 from the EU Council. In addition, it wants to change the Gas Directive. Is it a good idea to amend legislation because of one project?

We have first presented the mandate to negotiate with Russia on Nord Stream 2. We don’t consider that Nord Stream 2 contributes to the diversification of supplies, which is a key priority for the energy policy, in particular in the gas sector. It was not the case for Nord Stream 1, because at the time it was a new route. But now we don’t consider Nord Stream 2 a project that could be supported in any form by the European funds. In addition, we consider it important that if built, the project obey to certain clear reference rules and not be built in a legal void or based only on Russian law.

But Gazprom says there is no legal void and that European law simply does not apply to Nord Stream 2.

We don’t have same opinion as Gazprom. We are not prepared to see this project based only on Russian law. It is precisely for that reason that the Commission has decided to present a new proposal through the amendment of the Gas Directive. We aim to be extremely clear regarding the applicability of the energy acquis communautaire to all these types of projects, not only to Nord Stream 2. If adopted by the EU Council and the European Parliament, the new rules should be applicable to all types of projects having origin in a third country and arriving to the EU. It is important for us to ensure the fundamental principles of our energy policy: non-discriminatory (transit) tariffs, at least a degree of third-party access to the grid and a certain level of unbundling. The Commission’s proposal has illustrated its clear political will to go in that direction.

Will the new rules apply also to pipelines built in the past?

Regarding this aspect, we will allow Member States to grant derogations on the condition of non-interference with energy security. But we will not put in question the existing pipelines, that is not our aim.

The company Nord Stream 2 AG complained that the Commission did not perform an impact assessment before proposing the new Directive and that it did not conduct enough consultations with stakeholders. What do you respond?

There is no need for additional impact assessment, because it is crystal-clear that this type of project will, if built, interfere with our energy security in general and the diversification of supplies in particular. It will concentrate in one route the major part of gas imports. The proposal is sufficient to open a discussion and I hope an agreement will be found in the Council and the Parliament. I am also very pleased that President of European Council Donald Tusk sent a clear letter to the heads of states and governments in order to prepare the ground for a good discussion on the adequate level.

Member States remain divided. When do you expect to finish the legislative process on both the mandate and the Directive?

We consider both as absolutely complimentary. The amendment of the Gas Directive can clarify our (the Commission’s) positions. Then (thanks to the mandate) we will be prepared for a discussion with our external partner (Russian government).

Do you think the legislative process will be finished next year?

With these things we never determine a deadline. However, we are completely prepared for a rapid discussion.

The proposal for electricity market design includes an emissions limit for capacity mechanisms, which practically excludes coal power. But Eurelectric has expressed concerns about gas, too. Does natural gas have future in EU’s power sector?

I see a large support from governments and companies. For both the market design and gas power.

It is important to see the present acceleration of coal phase-out. This is new. In the recent past, a long list of countries decided to abandon coal around 2025. It will impact the world energy mix, the gas sector and the renewables. In that context it is more important than ever to facilitate the energy transition in particular in the coal regions. It is right to manage the whole social aspect and the creation of new activities at the same time as mines close. On 11 December in Strasbourg, we will politically launch a new initiative, Coal Regions in Transition Platform, dedicated to all mining regions, but also to carbon-intensive regions.

What will the Commission propose to these regions?

We have already sent Commission teams to Poland and Slovakia. We will, of course, associate all stakeholders – governments, the concerned regions, cities and companies. It is extremely important to identify – any time we have a closure of mines – all possible new activities in the same region. New jobs have to be proposed to the staff. I see an early positive reaction of the more concerned countries, in particular Poland and Slovakia, but also of some German regions.

Poland is one of the two EU countries building new coal power plants.

My impression is the opposite. Poland is facing the new challenge of energy transition, not having in mind new coal power plants or managing from one day to another, but having in mind the modernization of its energy sector. Poland is in a specific situation of 80 or 85 percent of power produced from coal. Yet, it wants to open the door to the modernization of its energy sector, while paying attention to solutions. With Poland, we have an extremely positive energy dialogue. We successfully finished (the legislative process of) the energy security package also thanks to the positive contribution of Poland.

Poland is for example blocking the Doha Amendment to the Kyoto Protocol.

The (Polish) energy sector is contributing a lot to a more positive evolution and position of Poland on various issues including the climate. We have an excellent dialogue with Poland. I am sure Poland will participate actively in all the new initiatives including the new Coal Regions in Transition Platform.

Corporate Europe Observatory, an NGO, says more lobbyists are coming to the Commission from the oil and gas sector than from other energy sectors. Do you feel the Commission is doing something wrong?

Certainly not. This (the report) is not based on correct figures. We are in contact will all key energy actors. We have so many meetings, not only with NGOs, but also organizations defending renewable energies and energy efficiency. We are in a close contact with all those supporting clean energy transition. The Commission should also remain in contact with all present realities including those who manage some changes in the transition. The most important danger is the danger of working in isolation.

The report based on the EU Transparency Register says the Commission is not working in isolation, but in a stronger presence of gas and oil lobbyists.

It is not my impression.

On one hand Eurelectric says you don’t attribute enough importance to gas power, on the other hand of green NGOs accuse you of being too much oriented on gas. How do you strike the right balance in your work?

It is important not to base these things on ideology, but on reality. What you say illustrates that we are in the middle.

(At a press conference) We are in a country, which in two years will produce 70 percent of electricity from nuclear energy. European Commission has had doubts about its cost-effectiveness, for example in Hungary. What should be the priority in research and innovation in nuclear energy?

The choice of energy mix is a national choice. At the same time, the EU has the capacity to manage a common policy target at the European level. This is particularly the case of renewable energy and energy efficiency. The Commission’s role is to manage things in order to reach those targets. This is a matter of credibility. I have the impression that Slovakia is in a position to reach its 2020 renewable energy target (of 14 percent from the primary energy consumption). I hope the trend will continue in the new context of the European binding targets based on a stronger governance and national energy and climate plans.

Nuclear still represents in the EU more than 26 percent of electricity produced without CO2. The absolute priority for nuclear energy in Europe is nuclear safety and security. In Europe, we develop the most important nuclear safety standards and norms. Not only we have in place primary law – Euratom, but we also develop secondary legislation dedicated to nuclear safety, nuclear waste and spent fuel management. We will also pay particular attention to decommissioning. For the first time in history, we will be confronted with the end of life of many nuclear power plants in Europe. Nuclear energy has been around for 40 – 50 years, but only now we are reaching the end of life of many of them. It is important to address this issue including on European level, since it will represent not only a new market, but also a challenge to manage at the highest nuclear safety standards.

Europe still has the world leadership not only in the new generation of nuclear plants, but also in enrichment and reprocessing. It will be important to manage it all while ensuring top-level safety.