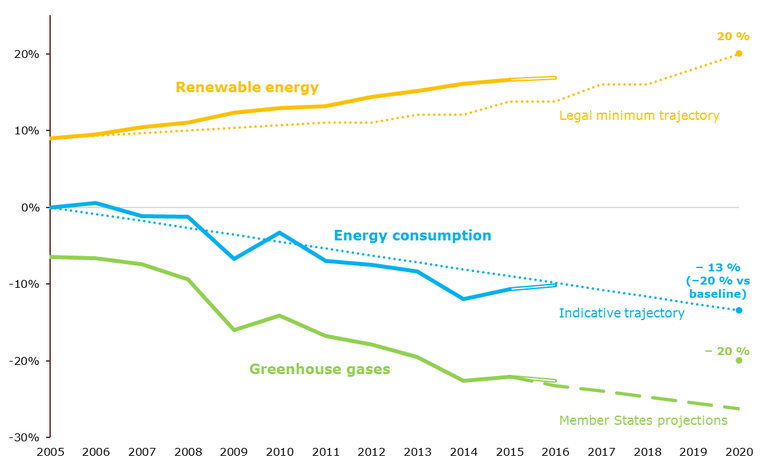 The Europe Union needs to increase its energy efficiency, strengthen interconnections between countries and come to terms with Russia on Nord Stream 2.

The European union is on its way to reach the 2020 targets. However, the year 2030, can be a challenge, found European Environmental Agency’s annual analysis.

The analysis is a part of the third report on the state of the Energy Union published on November 24. The report consists of several documents and hundreds of pages.

Commenting on the report, Vice-President responsible for the Energy Union Maroš Šefčovič said that “by 2019, the Energy Union must no longer be a policy, but a daily reality benefitting every European citizen. This will require increased ownership by all parts of society.” He sees the next year as “the year of engagement".

Aside from the mobilisation, what are the three main challenges the Energy Union faces at the moment?

EEA states that “thanks to earlier efforts, the EU is on track to reach its 2020 targets.” However, “this is not yet the case for the 2030 objectives,” the Agency warns.

In energy efficiency, the trend has shifted. From 2005 to 2014, energy consumption was decreasing steadily, but since 2015 it has been rising again. “Member States must step up their current efforts to meet the collective EU objectives of 20 % energy savings by 2020, and 27 % by 2030 (compared to 1990).” The 27 % target for 2030 has been adopted as the lowest possible ambition by the European Council. The legally-binding targets are being negotiated in the European Parliament and Council of the EU. This week, the MEPs voted for 40 % energy efficiency target.

EEA observes a positive trend in the two other 2020 targets. The target to reduce emissions by 20 % compared to 1990 has already been met; in 2003, they were lower by 23 percent. Concerning the share of renewables, the EU is on its way to meet the 20 % target; the share of renewables was 17 percent in 2016. However, the Commission’s analysts warn that the progress has been slowing down in recent years, especially in transport.

“There will be no energy transition if the infrastructure is not adapted to the needs of the future energy system,” the third report on the state of the Energy Union admits.

The report regards the results as “considerable achievements”, but it stresses that “important bottlenecks remain”. In 2020, four Member States are expected to remain below the 10% electricity interconnection target: Cyprus, Poland, Spain and the United Kingdom.

The Commission has adopted a 15 % electricity interconnection target for 2030. To facilitate it, the European executive has also approved the 3rd list of Projects of Common Interest. Out of the 173 projects, 110 are focused on electricity and smart grids, 53 on natural gas, 6 on oil and 4 on carbon capture and storage. The Iberian Peninsula focuses on electricity interconnectors to integrate a higher share of renewables, the Baltic Sea countries are interested in gird synchronisation and Central and South-Eastern Europe works on increasing its security of gas supply.

In the report on the state of Energy Union, the Commission recalls that the EU Council has considered its request for a negotiating mandate about Nord Stream 2 for six months already. The Commission has sought “a strong mandate” from the 28-nation bloc to negotiate on the offshore pipeline connecting Russia and Germany.

German Chancellor Angela Merkel deemed the mandate unnecessary and Gazprom claims that the EU rules do not apply to its pipeline. The Commission attempted a reshuffle by proposing an amendment to EU directive for the internal gas market. “The recent proposal for an amendment to the Gas Directive clarifies that pipelines to and from third countries are subject to the common rules for the internal market in natural gas up to the border of Union jurisdiction,” reads the report on the state of the Energy Union. Regarding the negotiations with Moscow, it adds that “international agreements with the third countries concerned will remain the most appropriate instrument to ensure that there is a coherent regulatory framework for the entire pipeline.”

The Commission wants to cooperate with Ukraine, which will register the highest losses in transit revenues due to Nord Stream 2. The cooperation will focus mainly “on regulatory and market reforms, promoting energy efficiency and the use of renewable energies, fostering security of energy supply and promoting the highest standards of nuclear safety”. Brussels welcomes the associated country’s reform on the electricity market and progress in energy efficiency.

Next year: transport and national plans

In the last three years the Commission has presented three legislative packages: on energy security, on reaching the 2030 climate and energy targets and reforming the electricity market, and finally the package on reducing emissions of passenger cars and vans.

„In terms of legislative proposals, we have introduced everything except the last package from the clean mobility area that will be cover self-driving cars and new standards for heavy-duty trucks,” said Šefčovič as quoted by the Press Agency of the Slovak Republic (TASR).

According to him, the Commission is currently aiming for the EU Council and European Parliament to adopt the proposals as quickly as possible, TASR writes. The Estonian Presidency of the Council wants to reach a general agreement on the whole package by December. The Parliament is not critical towards this initiative, so it can be expected that the trialogues of the three EU institutions will start in the beginning of 2018. At roughly the same time, the Commission will also await national energy-climate plans from the member states.